On the 21st and 22nd of November, over 500 participants from all around the world gathered in Paris to share skills, experiences, practices and knowledge at the OPSI conference, with the one focus in mind: making innovation in government the ‘new normal’. 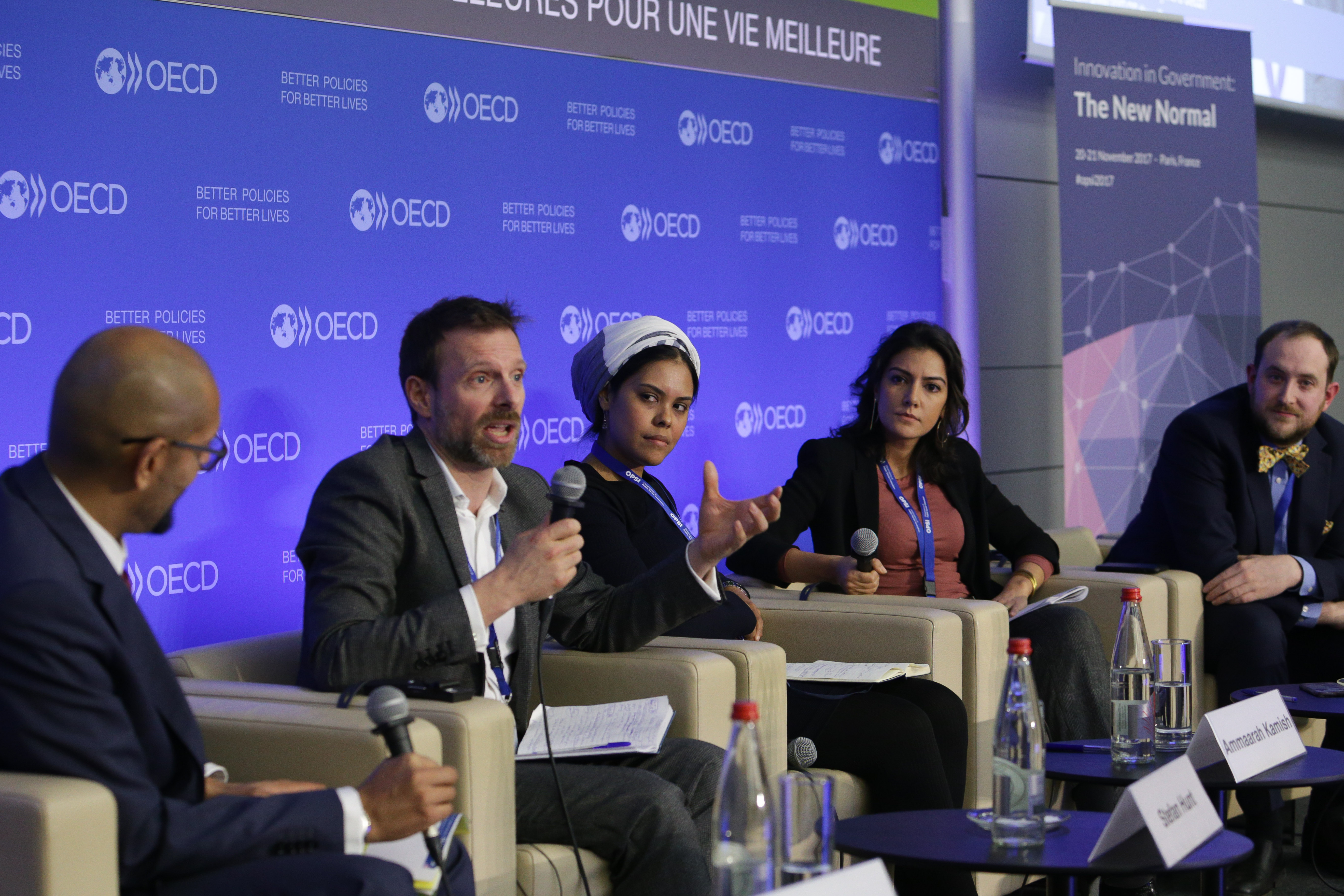 The theme of the conference Innovation in Government: The New Normal (#opsi2017) came from the belief that innovative people and practices certainly exist in government, but they are not yet mainstreamed as they should be.

The two day conference was organised in cooperation with the European Commission’s Directorate-General for Research and Innovation and featured a series of plenaries, discussions and participant-led workshops organised around four main pillars of conversation:

Innovation in government is an emergent field of research and practice. Our purpose here at OPSI is to research, document and share examples and experiences of government innovations through our network and online platform. We also have the role of connecting like-minded people. Nothing can replace the opportunity to meet, discuss and debate in-person. The conference was such an opportunity. We brought together government leaders, public servants and industry and civil society partners to share the kinds of insights and opinions so crucial to this field’s ongoing maturity. By questioning how to normalise innovation, we were prompted to think about the means by which paradigms within government can be shifted and new practices introduced and embraced.

The conversation was wide ranging, however the top four take-home points from the two days are:

Experimentation was discussed in two senses at the conference. The first way was in terms of method and methodology. Evidence produced through formal experiments is increasingly finding favour within governments. Experimentation was talked of positively, as it allows for iteration: rather than trying to tackle a complimented problem in one, all-encompassing expensive attempt, a small run of experiments can give government the kind of feedback it needs to ever refine its solution to meets its objectives.

The introduction of experimentation in policymaking As a result, governments are now grappling with bigger questions about what constitutes ‘rigour’ in policy-making and how to approach experiment repeatability and iteration in policy-making contexts. Experimentation was also discussed more colloquially, in terms of the need for public servants to be more exploratory in their work, to try new things and, even, to potentially fail. An oft repeated refrain was the need for ‘permission’ to do this and, so, the importance of culture and environment was also foregrounded. We also questioned how ‘success’ can and should be defined, measured and evaluated (and what indicators, tools and methods are well disposed to do this) in experimental cultures, where clear outcomes or impact might not yet be immediately apparent.

Slovenia’s Minister of Public Administration Boris Koprivnikar, likened ‘innovation’ to bungie-jumping. The analogy resonated with the audience, as it captures the sense of bravery or daring that is necessary to first trying something new. In his explanation, there is the crazy person who jumps first, others follow suit once they see it is fine and some need to be ‘tied on and pushed!’

The question we then faced was how do the first ‘bungie-jumpers’ feel empowered to act? How can they be supported when they do? What are some effective ways of ensuring that others can follow too? What is the best way to deal with resistance? These questions we have about identifying and supporting innovators aligns well with OPSI’s broader work on how to build capacity of innovation skills across the public sector and the conference provided much food for thought on how to enrich our thinking there.

Good decisions need good evidence. Under the rubric of evidence-based policymaking, the conference explored questions about how data should best be collected, organised, used and (most importantly) for what purpose. In asking how governments could and should harness data to fuel innovation and transform operations, we also turned our attention to the skills and capabilities with which public servants need to be endowed, in order to do so.

Broadly speaking, world-wide government innovation agendas can still be said to be built on loosely defined concepts and inconsistent implementation methodologies. Few governments can boast dedicated resourcing for innovation work or wholesale strategic recruitment and training of staff for innovation capacity. Yet, governments’ need to innovate is increasingly urgent. The intractable problems of rising inequalities, anxieties around technology, automation and globalisation and distrust in public institutions show no sign of abating.

Innovation in government is about finding new ways to impact the lives of citizens, and new approaches to activating them as partners to shape the future together. A strong message was repeated throughout the conference: involve citizens early and often. Doing so promotes government transparency and responsiveness to contextual needs and allows it to collaborate and forge partnerships with those who have the most stake in a policy or programme’s outcome.

Ultimately, the OPSI Conference helped propel this global discussion forward and instilled a strong sense of international community in the speakers and participants. Ensuring that we continue to have frank dialogue and share insights and practice within this community is our collective responsibility.

Check out our highlights reel here, our photos here,  and revisit key sessions by watching the videos here.

Interested in learning more about upcoming OPSI events?  Please follow us on Twitter @OPSIgov, and feel free to get in touch at [email protected]. We also encourage you to join our OPSI LinkedIn community to exchange ideas with fellow innovators and our newsletter to receive innovation updates.