> OPSI Blog > The Uncertain Promise of Blockchain for Government

The Uncertain Promise of Blockchain for Government

Since late 2019, we have been working to answer the question “why hasn’t blockchain, and its underlying distributed ledger technology (DLT), made a bigger impact in the public sector?”. It has been over two years since OPSI published the report Blockchains Unchained: Blockchain Technology and its Use in the Public Sector, and over a year since the OECD Digital Government and Data Unit published the report State of the Art in the Use of Emerging Technologies in the Public Sector. These reports sought to help public servants understand what blockchain is (and isn’t), the implications it could have on government, and the opportunities and challenges governments may face as a result. The reports surfaced hundreds of government blockchain initiatives in dozens of countries and found that there was tremendous hype and promise for the use of blockchain for driving innovation and digital transformation in the public sector. However, since then, we have not really seen breakthrough innovations in government, or a significant number of projects that have moved beyond proofs of concept or small pilots. At the same time, work done through the OECD’s Global Blockchain Policy Centre has helped to demonstrate as a series of proven private sector use cases, often linked to cryptocurrencies, fintech and other financial services. This leads us to wonder, why has the private sector managed to make significant progress in leveraging blockchain, while efforts driven by governments have often stalled out?

To help answer this question, OPSI and the Digital Government and Data unit have collaborated with blockchain expert Juho Lindman (associate professor of informatics at the University of Gothenburg, Sweden), who was identified through an open call, to review the latest research in the area, and to identify and analyse public sector experiences on successful and unsuccessful blockchain projects. The findings of this work were presented in the new report The Uncertain Promise of Blockchain for Government during the 2020 OECD Global Blockchain Policy Forum. The report provides early and observational evidence on beliefs, characteristics and practices related to blockchain projects and the organisations that seek to implement them, with a focus on factors that lead to success or non-success. 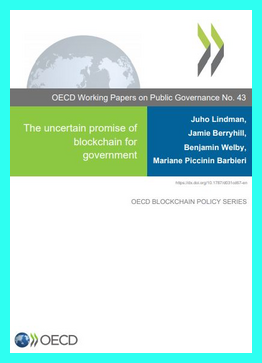 The report aims to cut through the hype around blockchain, equip public sector decision-makers with a better understanding of the current blockchain landscape, help officials take a critical look at potential use cases, and to assist them in their thinking as they consider and, if appropriate, initiate, manage, and de-risk blockchain technology projects. In particular, this report:

Helps public servants determine if a blockchain solution is viable, valuable, and vital to address a problem

The report provides an overview of the current situation and an overall framework to evaluate the benefits of blockchain services for a particular need using the three Vs (viable, valuable, and vital) checklist as applied to blockchain and associated use cases. In general, blockchain should be pursued when it meets all three criteria. 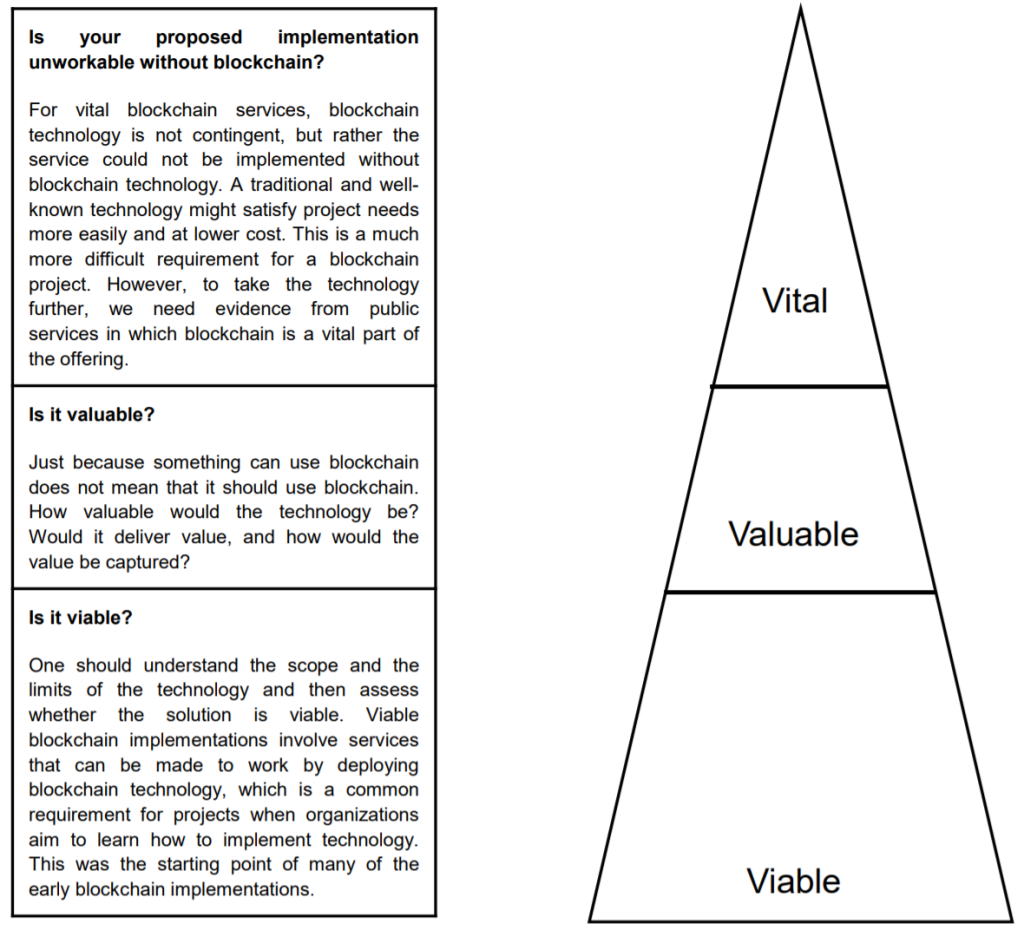 Source: OECD, as adapted from a framework conceived by Deloitte.

Technological breakthroughs are often — some would claim always — accompanied by unwarranted expectations and hype. This is not necessarily a bad thing: imagining the potential of technologies helps to make the possible use cases more concrete. However, public discussion around blockchain is still often full of off-base expectations about the technology and its potential. Research conducted for this report has shed light on several recurring myths related to public sector blockchain. Each of these myths is discussed in the report.

In reviewing successful and unsuccessful public sector blockchain projects, and by interviewing the teams behind them, we have documented early observations on factors that can lead to success and failure. Factors that contribute to success and non-success are discussed in the report, and consist of:

Blockchain is an advanced topic that requires a certain level of organisational and team maturity. The report considers blockchain through the lens of the new OECD Digital Government Policy Framework (DGPF), a policy instrument to help governments sustain high levels of digital maturity, and the Digital Government Index, the measurement instrument of digital maturity based on six dimensions. 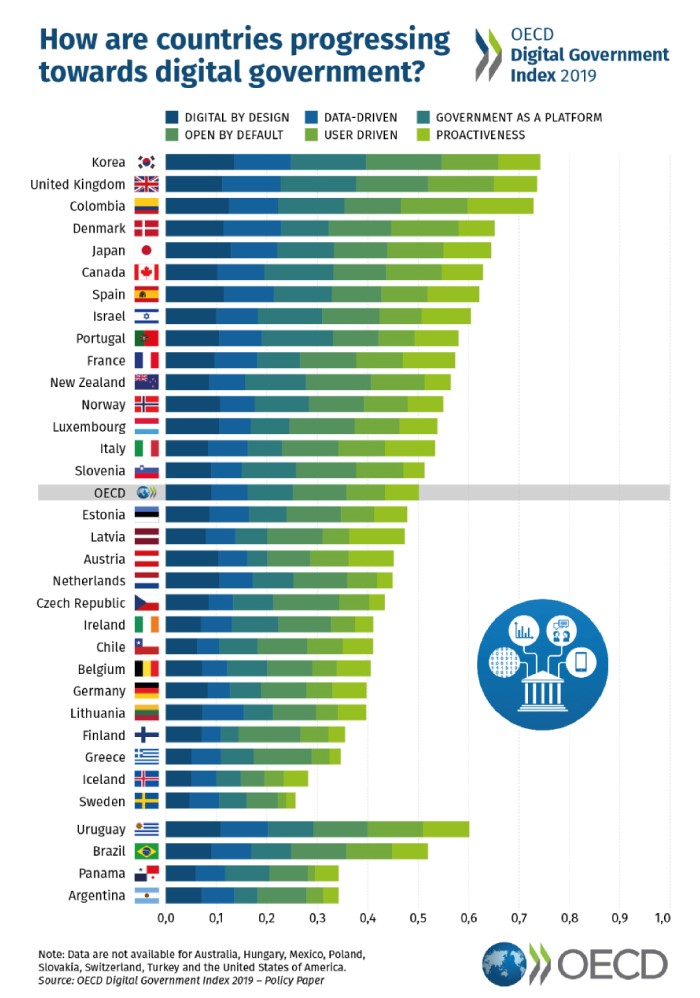 For assessing the suitability and implementation of blockchain in the public sector, the report considers the level of maturity in organisations and teams through the six dimensions of the DGPF framework: digital by design, data-driven public sector, government as a platform, open by default, user-driven and proactiveness.

Provides a series of case studies of blockchain on the frontlines

The report walks through a number of case studies of public sector blockchain projects, including those that have gained a real user base, which is the hallmark for blockchain success used in this report, as well as those for which blockchain did not fully meet expectations. In particular, the report covers:

The report also provides a longer list of additional blockchain use case that have gained users, which may warrant further analysis.

Experts provide their insights at the Global Blockchain Policy Forum

The Uncertain Promise of Blockchain for Government report was launched at a dedicated session of the OECD Global Blockchain Policy Forum 2020, the leading international event focused on the policy implications of this technology and its applications, led by the OECD’s Blockchain Policy Centre. Moderated by report co-author Benjamin Welby from the OECD Digital Government team, the session brought together Siim Sikkut (Government CIO, Estonia) and Ann Cathrin Riedel (Chairwoman of LOAD e.V. – Association for liberal Internet Policy) to discuss why they think the promise of blockchain for government is uncertain and where they think the technology is headed.

The full session can be viewed in the video above, but some key take-aways include:

We’d like to thank Ann Cathrin and Siim for their valuable insights and interesting discussion. These topics and others can be found in the full video above.

Although blockchain has yet to impact or disrupt the public sector in the ways that early hype had predicted, government decision makers will need to understand and continue to monitor this rapidly emerging technology closely. Blockchain technology, when specifically and appropriately applied, may still hold significant potential for the transformation and innovation of public policies and services. We will continue to monitor developments in this area. If you know of any successful blockchain projects that have moved beyond pilots and have gained a strong user base that we should consider for future work, please let us know by adding it to the comments below.

To learn more, we encourage you to read the full report here, and to watch the video above. Additional government blockchain case studies can be found on OPSI’s Case Study Platform. You may also subscribe to OPSI’s newsletter and join the OPSI LinkedIn page for updated on activities in the public sector innovation community.