There’s been a flurry of activity at OPSI over the past few weeks. While we’ve been working to pull together a systems thinking workshop that we will be hosting in Paris tomorrow (link in blog), a few of us made our way to Dubai to attend the 2017 World Government Summit in order to launch our latest report: Embracing Innovation in Government: Global Trends. We had the opportunity to meet innovators from all over the world, and hear fascinating insights on the future of government and innovation. 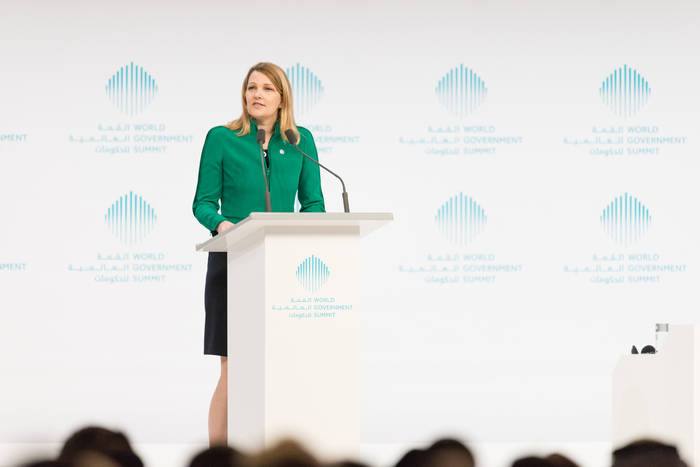 As we’ve blogged about before, OPSI worked closely with the UAE’s Mohammed Bin Rashid Centre for Government Innovation (MBRCGI) to conduct a global review of innovation in government. This work culminated in a new report—Embracing Innovation in Government: Global Trends—which was launched on February 12th at the World Government Summit.  OECD Deputy Secretary General Mari Kiviniemi hosted a press conference early in the morning and previewed the report with media outlets. Rolf Alter, OECD’s Director of Public Governance and Territorial Development (GOV), officially launched the report at the “Global Platform: Innovation and the Future of Governance” panel discussion. 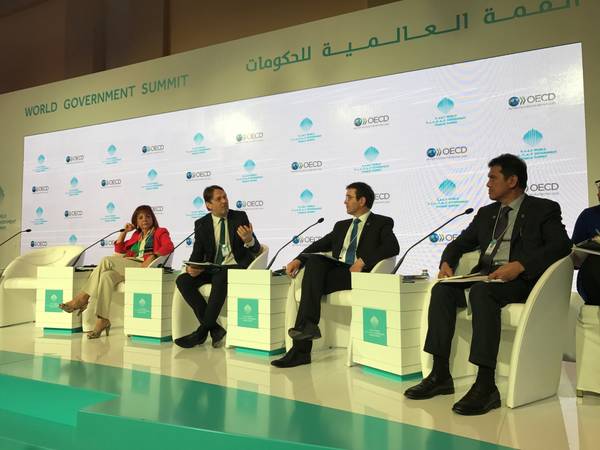 For the discussion, we convened three ministers with significant experience in government administration and innovation to discuss the key findings from the report, and to give their insights on how to transform government through innovation. The ministers were (from left to right in the photo above, with moderator Rolf Alter sitting second from the left):

Rolf Alter kicked things off by touching on the significant and complex political and economic challenges that governments are facing today, and how governments are meeting them head on by embracing innovation to come up with new approaches to how they operate, make decisions, and engage with and deliver value to their citizens. He then provided an overview of the report’s key findings and recommendations, and posed a series of questions to the ministers.

Ms. Marques focused her responses on leadership to foster innovation, and acknowledging the critical role of citizens as partners is the design and implementation of policies and services. She got the discussion off the ground by talking about the importance of signalling innovation as a key priority from the highest levels of government, a key recommendation from the Embracing Innovation report. This must be done through action, she cautioned, and not just talk. She discussed Portugal’s innovative “SIMPLEX+” initiative to streamline and simplify government as an example of such action, which is a backed by senior leaders through government with an aim to reduce the burden on citizens. Its efforts seek to connect civil servants to improve the sharing of data and information, bring in ideas from the public, and award innovative thinking and ideas. She also discussed Portugal’s efforts to launch the first nationwide participatory budgeting initiative, which will allow citizens to generate ideas for government spending, and then vote to determine which ideas are carried out.

Mr. Koprivnikar, with an education and professional background in technology, discussed the digital transformation of government and how this is both innovative in itself, and a catalyst for future innovation. To my personal delight, Mr. Koprivnikar discussed the need for solid data governance and management as a foundation for innovation. He advocated for three core “building blocks” needed to achieve this:

I was excited to hear these insights, as OPSI will be releasing a new report in the spring—Fostering Innovation in the Public Sector—that includes a chapter on “Data, information, and knowledge: fuel for public sector innovation” that aligns closely with Mr. Koprivnikar comments.

Right after the panel discussion, OECD Deputy Secretary General Mari Kiviniemi gave the day 1 keynote speech, which focused on enabling the future of successful governments through the principles of openness, transparency, and accountability. In addition to these principles, Ms. Kiviniemi emphasized to the audience that an additional key characteristic of successful governments is their ability to respond to growing complexities, and that in order to do so, governments must be able to innovate continuously. She discussed the success factors and recommendations contained in our report, and highlighted her favourite case study from the report: Mexico City’s Mapatón. With one of the largest public bus systems in the world and 14 million rides per day, the city had no data on routes, leaving residents to rely on word-of-mouth. To address this, city leaders designed a travel game that relayed critical GPS coordinates while being played. In two weeks, for USD 15 000, over 4 000 riders generated enough data to map the bus system. “This is innovation, and governments are embracing it to transform the way they work” said Ms. Kiviniemi.

The findings from the Embracing Innovation in Government report are highly aligned with the key themes of this year’s Summit, which include improving citizen well-being and happiness, enhancing government agility, and unlocking future opportunities. Our partners at the MBRCGI put together the Edge of Government, an immersive experience through exhibits designed to trigger new thinking and inform and inspire visitors to connect with the innovators behind the best practices and case studies showcased and adapt the approach in their own context. Four of the case studies from the Embracing Innovation report were featured as exhibits in the Edge of Government. The folks responsible for these innovations were on hand to discuss their work and the impact it has had, and we were excited to others being inspired by their innovation. 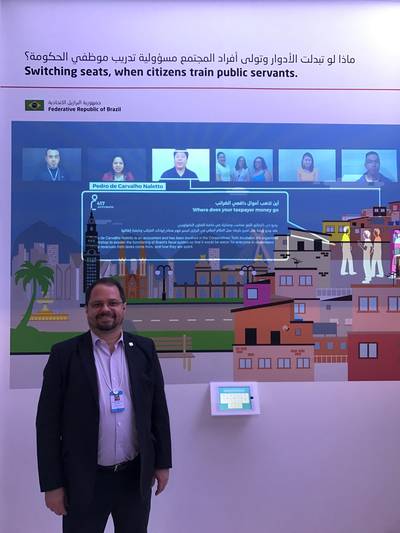 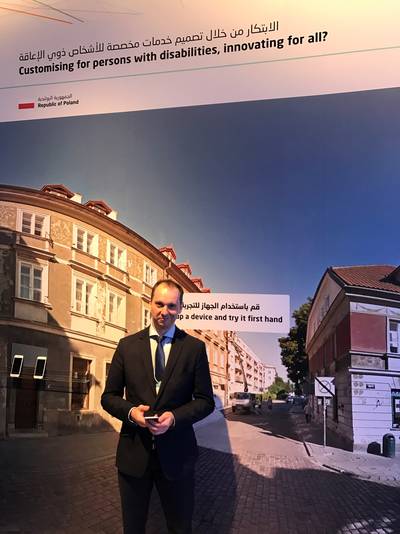 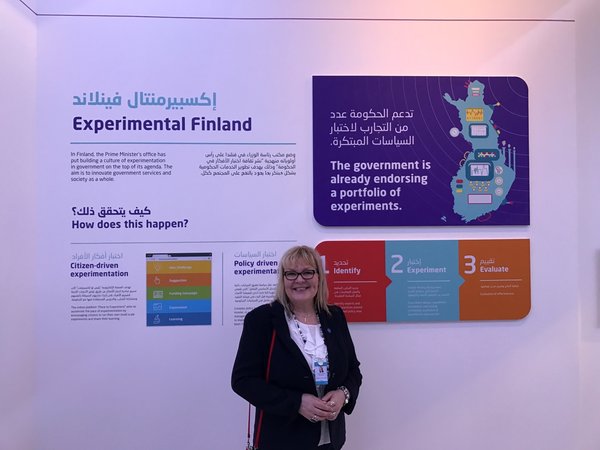 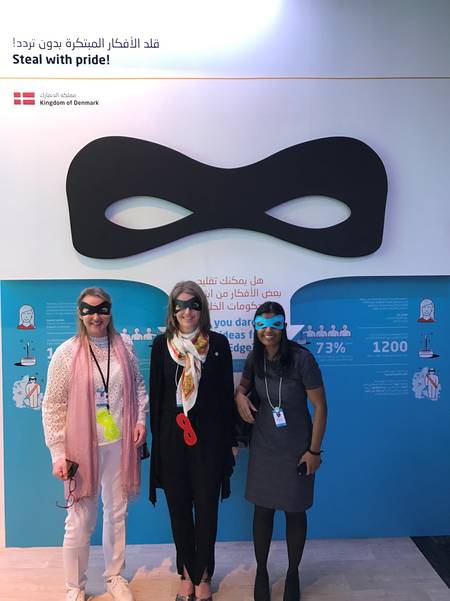 Although these sessions and exhibits were the dearest to our hearts, the World Government Summit agenda was filled with interesting sessions and speakers. The leaders of other international organisations—such as António Guterres, the new Secretary General of the United Nations; govenments—such as Dr. Miro Cerar, the prime minister of Slovenia; and industry—such as Elon Musk, the CEO of Tesla and SpaceX. There was a great deal of discussion on globalisation, nationalism, polarisation, and automation. These are heavy topics that will take us all much longer than three days to grasp. We left the event somewhat anxious about the major challenges that governments will face in the coming years, but also inspired and heartened by the fact that many of these challenges are shared, and that we are increasingly working together to create common solutions for our collective goal of a better future.  We’d recommend checking out the Summit’s YouTube channel for a little inspiration of your own.